Edith Dawn was born Thursday 26 June, 7:19pm, weighing 9lb 6oz, 58cm and a completely natural vaginal birth. This was amazing for many reasons- my size (I'm a thin woman), condition (I had hyperemesis gravidarum during pregnancy), my low tolerance of pain, and issues with obstetricians prior to delivery.

Born at 40wks +11days we were on a race against the clock. I had a horrid time with obstetricians prior to Edith's birth, with doctors adamant I book in an induction from 39weeks with no medical reason besides scheduling. I was bullied, called a 'problem', informed many times I was killing my baby, and told because I had a birth plan I was setting myself up for a terrible birth. I was not opposed to induction, but did not want my birth scheduled before day 10 unless there was a medical concern- “she will come when she is ready I thought.” In tears and extremely upset from both my 39 and 40 week appointments, Cheryl picked up the pieces at a moments notice.

Edith was my second birth. My son Jack- now two and a half, was born in a posterior position, had breathing issues, and overall was a difficult birth. I required an epidural which only half worked, had many stitches and was extremely ill during and following his delivery; obviously no Doula assisting.
I was determined to improve things this time; birth off my back, save vocalisation for when I needed it most, labour with my waters intact as long as possible (with the hospital keen to break them upon arrival), and labour in the comfort of my home; all things in conflict with my doctor.

The day arrived and I was so pleased labour started spontaneously at home at 2am, the day before her scheduled induction. I got my hubby to fetch a heater and continued to do my thing until our son woke in the morning. After getting him happily off to a friend’s place I continued in early labour at home with contractions strong but ranging from 10 minutes to 3 minutes apart, depending on positioning. I rested when I could, went to the bathroom frequently in attempt open up and reminded myself to relax, had a shower, ate, walked around the house, used a heat pack and tried to conserve energy and move through my active birthing poses. I was focused trying to keep Edith anterior. At 2pm my contractions stalled for three hours and I had a sleep. Having just picked up the flu I woke in a horrid mood and my hubby needed a break. Cheryl came to our house to allow my hubby to fetch dinner. Once Cheryl left we ate dinner - with me rocking on a ball and the contractions came on hard and fast.

During my son’s birth I was emotionally shattered when we were told at the hospital I was only 2cm dilated. I was at the end of my tether at that point and had intensely laboured for hours with contractions 2 minutes apart.
This time I just kept saying to myself “Kim, you’re only 0cm just keep going”. My hubby used a birthing app to count me through each contraction which felt reassuring. A strong contraction came and I nearly broke my hubby's hand. I felt the need to stand upright. At that point I said “I know it’s only 6:30pm but I think we need to go to hospital.” With the next contraction I squealed in pain and boom my waters broke all over the bed. I turned to my hubby and said I think she is coming. I hit a crisis point and mentioned that maybe I can’t do it naturally and may need pain relief. A moment later I was saying I'm not going to make it to the hospital and to call an ambulance. Hubby then demanded I get in the car immediately.

It was the longest trip ever to hospital. On the trip in I started involuntary pushing. I hit transition in the car with a hot flush and kept rambling that we aren't going to make it. Cheryl met us in the emergency car park and took control of the situation racing me down to delivery, me squealing and hanging over the back of a wheelchair. Seven minutes after we arrived at the hospital Edith was born.

After 9 months of hyperemesis, being unable to work, expensive medication, hospitalisations and both physical and emotional challenges I had MY IDEAL BIRTH.

A natural birth, no tearing, perfect baby, immediate breastfeeding and attachment, delayed cord clamping, spontaneous water breaking, minimal vomiting, everyone in attendance. Although I had a haemorrhage following her delivery it was brought under control and did not impact on my experience.

I must thank the wonderful people in my life that got me through those dark hyperemesis days including Cheryl for those cuppa catch ups, birth skills sessions, and birth support.

I was blessed to have my ideal birth, and new mums, don't lose hope it I can be your experience too.

“ I loved that Cheryl was experienced….I felt completely able to turn to her as a credible source of knowledge and support. ” 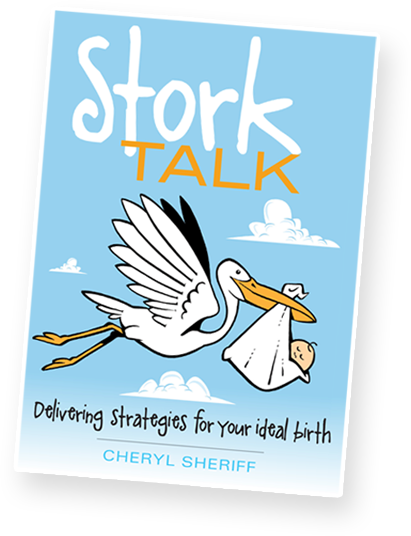 Delivering Strategies for your ideal birth.

Give yourself the best chance of a positive birth in a hospital setting. A new book by one of Australias leading doulas, Cheryl Sheriff.

Sharing wisdom from her 30 years experience as a midwife and doula, and her presence at over 1000 hospital births.

After reading this book you will have more direction, and feel confident, excited and less daunted by the experiences to come.